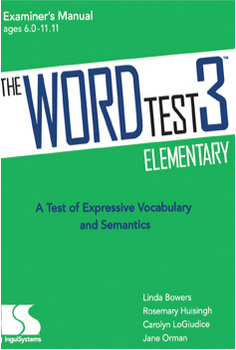 The WORD Test 3 Elementary assesses a student's ability to recognize and express semantic attributes critical to vocabulary growth and language competency. Current research clearly supports the impact each task on this test has on academic and reading competency. You will understand how your students attach meaning to words and why they might be struggling in the classroom.

The six subtests of The WORD Test 3 Elementary measure skills that correlate with word mastery, reading comprehension, and overall academic success. Test items are from the curriculum, including language arts, social studies, math, health, and science. There are fifteen tasks in each subtest.

Examiner Qualifications: The test should only be administered by a trained professional familiar with language disorders (e.g.,speech-language pathologist, psychologist, teacher of the learning disabled, special education consultant).

Discussion of Performance: The Discussion of Performance section in the Examiner's Manual guides the examiner to make appropriate and educationally-relevant recommendations for intervention based on a clear understanding of each task. There are examples of how weaknesses are exhibited in the classroom and instructional suggestions to assist with intervention planning based on current research and best-practice strategies.

The importance of learning Tier 2 vocabulary is given prominent attention in this section. Research and intervention strategies tied to this preeminent research can increase the effectiveness of your therapy plan.

Standardization and Statistics: The Word Test 3 Elementary was standardized on 1,302 subjects. Demographics reflect the national school population from the most recent National Census for race, gender, age, socioeconomic status (SES), and educational placement.

Validity—established by the use of construct and contrasted group validity.

There are three Chi Squares out of 30 that are significant—one at the median, one at the 25th percentile, and one at the 75th percentile. The results of the two-factor ANOVA involving race and SES showed 56 of the 72 statistical tests for race and SES combinations, there were no significant differences. Some significant differences occurred in 16 of the 72 analyses. None of the race by SES interactions reached statistical significance. Neither race nor SES has a major impact on The WORD Test 3 Elementary.